SUCO pressure transmitters of the 0630 series support the CANopen® protocol (according to CiA DS-301) with a data transmission rate of up to 1 Mbit/s, which has established itself as the standard especially in the automotive and automation indutry. The 0631 series is based on the J1939 protocol (according to SAE J1939), which is mainly used in heavy commercial vehicles and mobile machines.

The pressure transmitters of the 063X series are designed for pressure ranges from 0 - 1 bar to 0 - 600 bar. Thanks to their robust stainless steel housing 1.4301 / AISI 304, they combine the advantageous material properties of analog transmitters with the advantages of digital transmission technology. The completely welded measuring cell made of stainless steel 1.4542 is particularly corrosion-resistant and guarantees media compatibility at temperatures from -40°C to +125°C.

The CAN bus transmitters with IP67 protection are extremely resistant to shocks and vibrations, which are common in mobile machines and industrial systems. Further unique selling points are extraordinary long-term stability and reliability with a service life of up to 107 pulsations.

SUCO currently offers the CAN J1939 pressure transmitter type 0631 as a pre-configured plug'n'play version at factory, which can be installed directly in the respective system without major effort. The CANopen® transmitter type 0630 can either be specified with predefined values or according to customer requirements. In both cases, the values can be subsequently changed by the customer on site by using a CAN programming software.

Pressure transmitters with CANopen® protocol from SUCO extend the possibilities of analog transmitters by numerous functions, such as the transmission of additional process and parameter data in real time (temperature, pressure values in various types, error messages, operating status, time stamp) or the setup of event-driven data transfers (events).

In addition, both the CANopen® and J1939 protocols enable interference-free serial data transmission, where transmission errors are reduced to a minimum thanks to numerous control mechanisms. Thanks to the integrated diagnostic function, interference signals and error sources can be quickly eliminated, which in turn increases the system's reliability.

In complex systems with many interfaces and long cable lengths, a CAN bus network can be used to reduce material, installation and maintenance costs.

SUCO's new digital CAN bus transmitters can be used in a wide range of applications. In addition to their origins in the automotive industry, CAN systems are now mainly used in special and commercial vehicles (construction, agricultural and road machines) as well as in local public transport (trams and underground trains) to control components such as door controls, starting and braking control as well as safety-relevant systems such as distance control or ABS.

The advantages of the CAN bus in terms of space and cost savings as well as flexible expandability are now also being used in aviation and complex marine applications. Thanks to the advancing digitalization, CAN networks have also established themselves in building and automation technology as well as in medical and diagnostic applications. 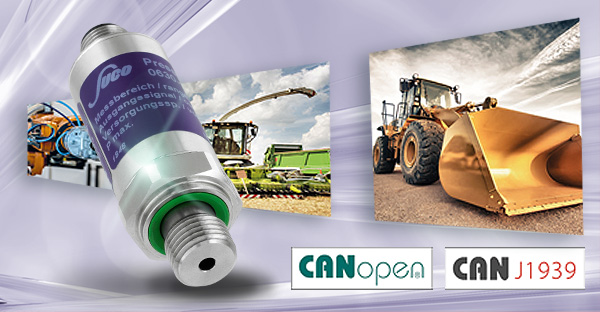