Through continuous product development, SUCO has succeeded in further increasing overpressure safety and bursting pressure. This has a positive effect on the service life and operational safety of their products.

For decades, mechanical pressure switches from SUCO have acquired an excellent reputation worldwide. Its customers include well-known manufacturers in the fields of mobile hydraulics, machine and plant construction, as well as medical and process technology.

In addition to the wide range of variants and the defined temperature resistance covering extreme conditions (NBR down to -40°C, FFKM up to +120°C), the extraordinary features of SUCO’s mechanical pressure switches also include long service life and outstanding overpressure safety.

By continuously optimizing its processes and components, SUCO has succeeded in significantly increasing the already above-average overpressure resistance of its mechanical pressure switches. This was confirmed, among other things, by an external, independent test laboratory as part of a dynamic pressure change test.

A selection of mechanical diaphragm and piston pressure switches has been tested. Based on the test results, the above average overpressure resistance values of all tested pressure switches can be confirmed. Some of the series completed the entire test scenario with a total of 1.5 million cycles at various pressure levels up to max. 720 bar without failure.

Following the results, SUCO will extend the values for static overpressure strength even further. In addition, SUCO will specify values for the static burst pressure for the hex 24 and hex 27 mechanical pressure switches in future, which will reach impressive values of up to 1,000 bar (14,500 psi). 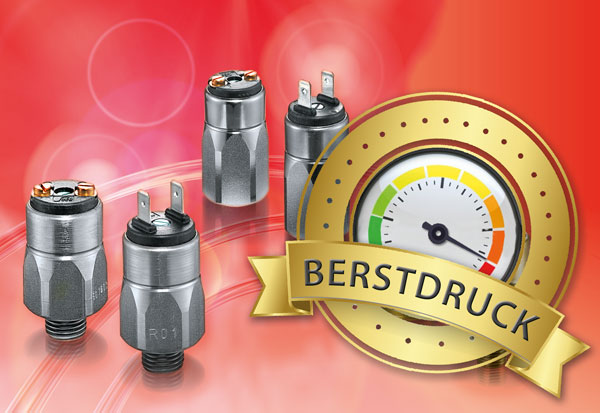