Most successful Bauma of all time

A month has now passed since the world's largest trade fair for construction machinery and equipment closed its doors in Munich. Together with the Hannover Messe, SUCO looks back on two very successful trade fairs.

With 215,000 trade visitors on 5 days, the Hannover Messe did not set a new record this year, but convinced with a high proportion of international visitors from abroad. This trend is also reflected in the evaluation of the countries of origin of the trade fair contacts.

Bauma 2019, on the other hand, achieved a new visitor record with 620,000 visitors from 63 countries, after the exhibition area was increased to 614,000 m². There was also a strong increase in the number of international trade visitors here. SUCO itself rated the last trade fair as the "most successful bauma of all time", as the number and quality of contacts exceeded all expectations. The numerous trade visitors from Italy, Poland and Asia showed particular interest.

The two interactive application models on the SUCO booth probably served as a further attraction. In the field of transmission technology, a functional hybrid drive with two engines and a SUCO clutch was presented that could be operated directly from the corridor. The various operating modes of a hybrid drive can be simulated via the self-explanatory control panel. The respective mode is additionally indicated by the lighting / flashing of different coloured LED strips.

The functional pressure monitoring model was not only a visual highlight. Against the backdrop of the Bietigheim Viaduct, three coloured water columns were installed that pumped a water volume of 30 litres per column upwards until the maximum filling level was reached and then discharged again. Fill-level monitoring was achieved by various SUCO pressure switches and transmitters mounted on the side of the water columns. Two tablets also enabled the measured pressure values to be viewed in real time by the audience.

Following the extremely positive results of the two trade fairs, SUCO is now already looking forward to this year's Agritechnica, which will take place from 10 to 16 November 2019 in Hanover. 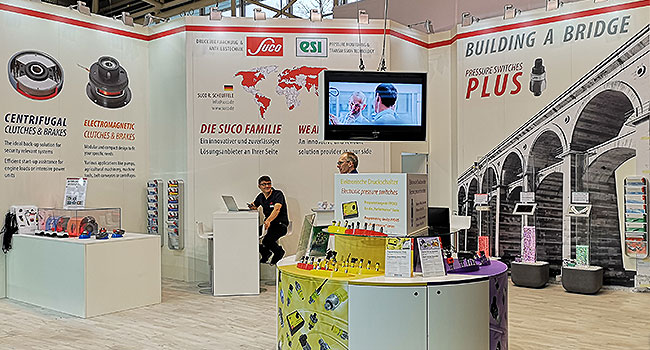